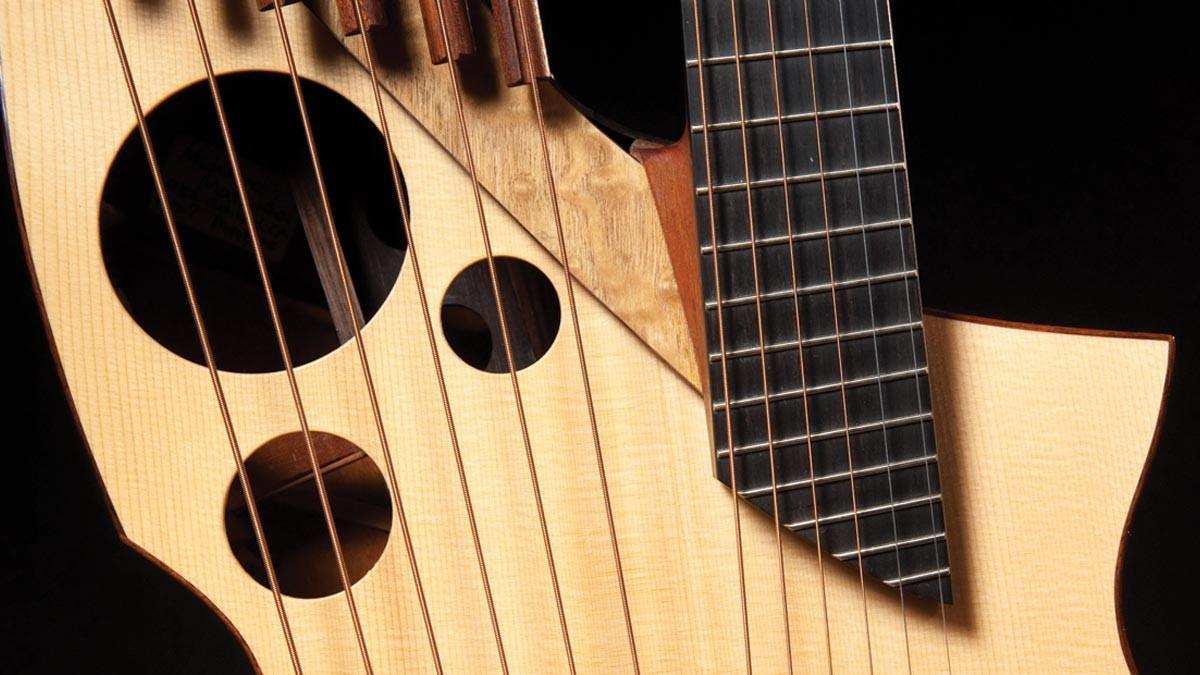 To Fret or Not to Fret

Our next special exhibition entitled Floating Strings: The Remarkable Story of the Harp Guitar in America opens in early October. The exhibition will be developed and designed by museum staff along with very special guest curator, Gregg Miner—one of the world’s foremost harp guitar scholars—and will include more than 40 beautiful examples of this unique instrument. In addition to the stunning display of instrumental craftsmanship, the exhibition also looks at the history of the harp guitar, from its beginnings in Europe to its current status and use in the United States today.

Before we get into that history though...we better define what a harp guitar is! Basically, it’s a guitar (which has fretted strings), with any number of floating strings (unfretted, like a harp) added. Thus, harp guitar. But no need to fret about the definition (sorry about that)! There will be no quizzes, just a delightful exhibition experience.

The harp guitar had been around Europe since the late 1700s, with sporadic experiments dating as far back as 1659. Continually sprouting up in one form or another, some types were so common that they didn’t even warrant a special term; they were simply guitars, described by their number of strings. Other instruments had fantastical forms with strange new shapes. Some of the distinctive designs and inventions launched new, if temporary, traditions while others died a quick and ignoble death.

It’s unknown how much awareness of these instruments there was in America. Beyond a couple rare occurrences, 19th century American musicians remained seemingly oblivious to the long and varied European history of guitars with floating strings. Thus, while there were many precursors to our American harp guitars, there may have been few direct influences—nothing that can be proven. Incredibly, Americans may have created many of this country’s harp guitars independently.

At the same time, it was Americans who came up with the romantic name of “harp guitar.” And it would prove a surprisingly durable romance indeed. For over three decades—predominantly between 1890 and 1920—harp guitars in all their fresh variety would remain popular with American fretted instrument builders and players, from amateurs to professionals.

Though they subsequently disappeared for several decades, a rekindled love affair with the American harp guitar began to blossom in the 1980s and continues today in a worldwide renaissance. Including this new exhibition here at the Museum of Making Music!

As always with our special exhibitions, there will be an extensive complementary line-up of concerts and presentations. So look for those in the next issue of notes and in groove, the Museum’s event calendar.

One special event we can tell you about right now though: The 15th Anniversary Harp Guitar Gathering (the largest celebration of all things harp guitar in the US!) will take place October 13 to October 15, right here at the Museum. It’s Coachella and Burning Man for the harp guitar. (Okay, we made that part up.) But the “Gathering” is for real and quite an amazing weekend of music. Go to www.harpguitars.net for more details and make your plans to attend.